The title of this post has the word bacon in it.

Only good things can happen moving forward from here. 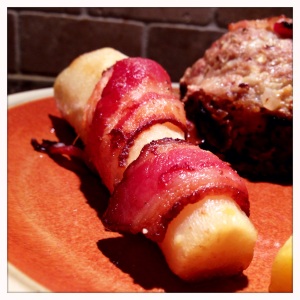 I stumbled across a recipe for bacon-wrapped parsnips on another blog (which I can not seem to find again), and discovered this is apparently an incredibly common and popular British side dish. While the Brits may not be exactly revered in the culinary world all that often, I couldn’t imagine this combination being a miss. Consider the following:

So, I gave it a shot, and even with a few hiccups, it was pretty awesome. I served the parsnips with a basic turkey meatloaf muffin, which I also topped with a small piece of bacon since there were a few pieces left after wrapping the parsnips and, well, see #3 above.

These turkey meatloaf muffins will be briefly outlined below… 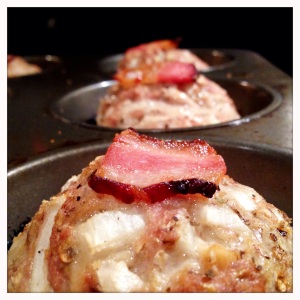 …but the focus of this post will be the parsnips.

So…let’s get bacon. I mean let’s get started. With bacon. 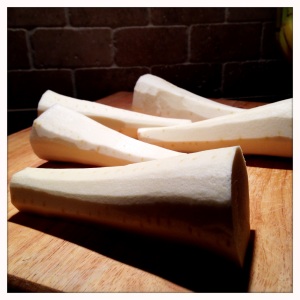 Set a pot of water to boil on the stove and preheat your oven to 400 degrees while you peel the parsnips. Once the water is boiling, salt the water and be sure the salt dissolves. The salt is going to help infuse a little flavor into the parsnips before wrapping and roasting. Place the peeled parsnips in the pot and let them boil for 3-4 minutes. 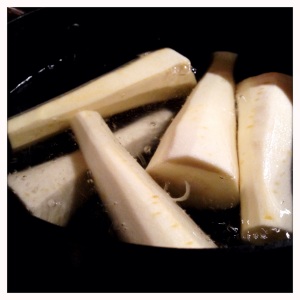 Carefully remove the parsnips from the water and set them on a cutting board to cool a bit so they can be handled. Wrap them tightly with the bacon, and arrange them on a foil lined baking sheet. 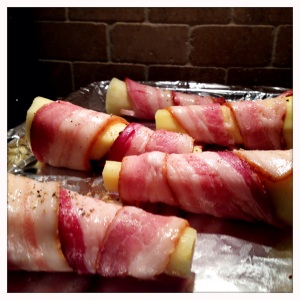 I gave them a quick dusting with the pepper grinder, but this was a personal choice based on my (possibly unhealthy) love for peppered bacon. The majority of traditional British recipes I saw did not use the pepper. Once the parsnips are wrapped and on the baking sheet, put them in the oven. Let them roast for about 15 minutes, then carefully rotate them with tongs to evenly cook the bacon. They will probably need about 30-40 minutes total in the oven. I didn’t give them quite enough time, which left the centers a little tough at the thick ends, but the thinner ends were delicious. (Note: I will experiment more in the future, but it’s possible an extra 2-3 minutes boiling in the pot might help with this as well.)

While the parsnips are in the oven, here’s a tasty, basic meatloaf muffin augmented with the leftover bacon. The bacon and parsnip has such a rich flavor, I made a very mild meatloaf to go with it to avoid taste bud overload…

Combine all of the ingredients in a large mixing bowl, and work everything together with your hands. Divide into even sized balls equal to the number of cups in your muffin pan. Place a drizzle of olive oil into each cup of the muffin tin and spread to evenly coat the cup. Place a meatloaf ball into each cup. Place a small piece of bacon on top of each ball, and place the muffin tin in the oven. 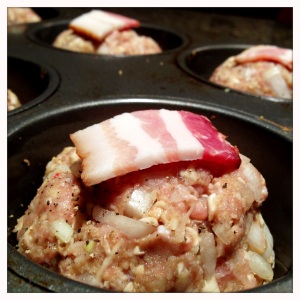 Bake the muffins for about 30 minutes, and you will be rewarded with a tasty meatloaf muffin with a perfectly crisped bacon nugget on top. 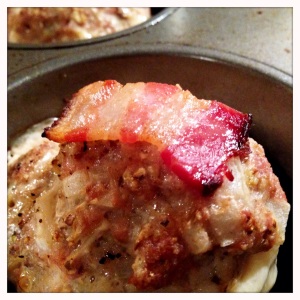 Okay, back to the parsnips, they’ve been turned, the kitchen is starting to smell like bacon and it’s time to pull them out of the oven. 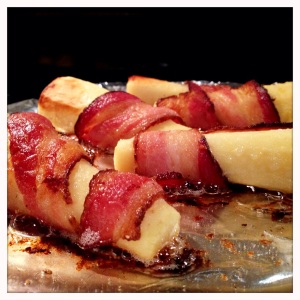 Be careful when handling the baking sheet as there will be a fair amount of scorching hot bacon grease rolling around. This can certainly be saved and used in a soup stock or any of a number of other uses (Googling “uses for bacon grease” will give you no shortage of ideas).

Plate two parsnips with a meatloaf muffin, and you have a delicious treat that everyone will enjoy. 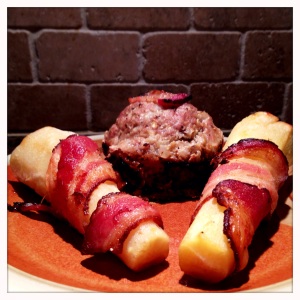 As has been mentioned before, this isn’t by any means a “health food” blog. I do think that just about everything can be consumed in moderation. Bacon is consumed rarely in our house, but I like to make the most of it when we do eat it.

Much like the brussels sprouts that pop up on this blog frequently, I think the parsnip is a misunderstood and highly underused vegetable, but this recipe is a simple way to add the delicious and unique flavor of parsnip to your veggie arsenal. Enjoy!

© Jason Rice and "Eats For All Ages" - 2012 to present. Unauthorized use and/or duplication of this material without express and written permission from this blog’s author is strictly prohibited. Excerpts and links may be used provided that full credit and citation is given to Jason Rice and/or "Eats For All Ages" with appropriate links or direction to the original content being used.